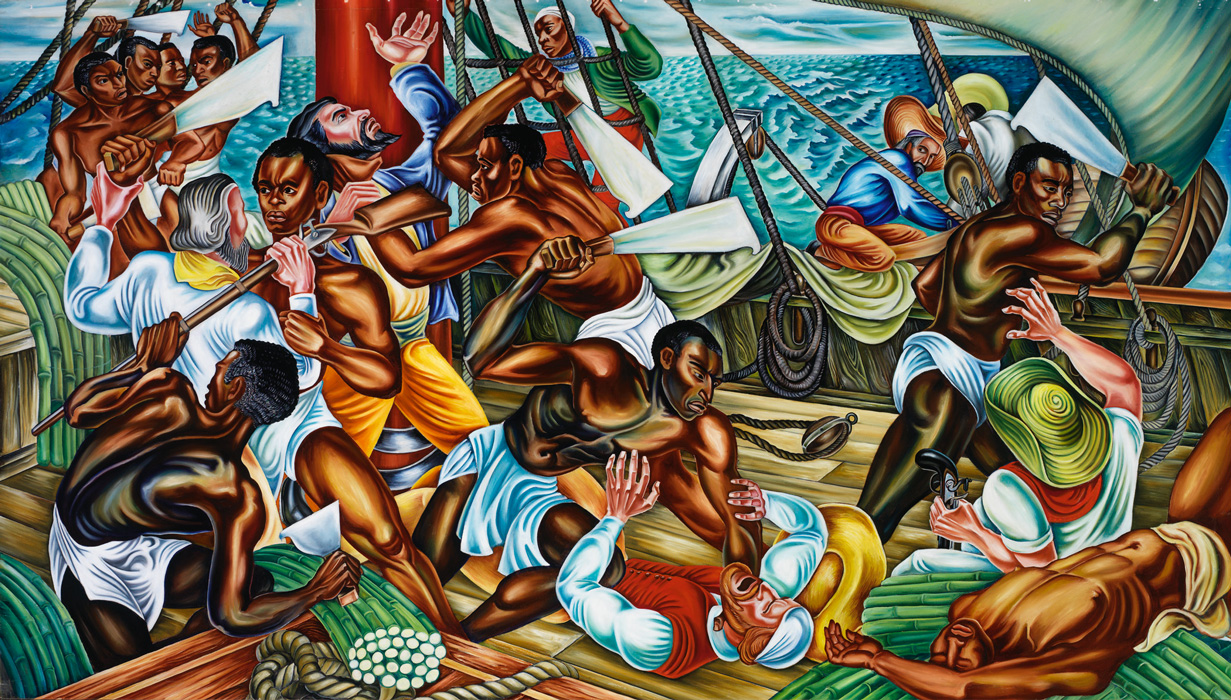 Imagine:  You are a student at Talladega College, a school founded two years after the end of the Civil War and the first in Alabama to accept enrollees of all races. Between classes, you walk into Savery Library, a building that opened on the centenary of a mutiny by African captives aboard the Spanish schooner La Amistad off the coast of Cuba. At your feet, inlaid in the lobby’s terrazzo floor, is an image of that vessel sailing on calm green waters. It offers no portent of the event that would occur on July 2, 1839. You look up. The details of that fateful night at sea, as well as episodes emblematic of one hundred years of oppression, revolt, and empowerment, leap from the walls to arrest and engage you. Vibrant, monumental, and powerful in composition and content, they are the murals painted by Hale Aspacio Woodruff.

Thanks to a partnership between Talladega College and the High Museum of Art in Atlanta to conserve Woodruff’s murals and present them to a national audience for the first time, visitors to The Nelson-Atkins Museum of Art can do more than imagine such an encounter. Instead, they may experience for themselves Woodruff’s six oil-on-canvas murals in the exhibition Rising Up: Hale Woodruff’s Murals at Talladega College. The murals, painted between 1939 and 1942, have been hailed as symbols of hope for racial equality and a significant artistic achievement. Through January 10, 2016, they may be appreciated and explored in depth before they return to Alabama. The thematic, temporal, and visual connections Woodruff created to link the two mural cycles he painted for Talladega College are emphasized by the manner in which they are presented at the Nelson-Atkins—in a single gallery so that the cycles, as well as the individual murals, might be in dialogue with each other and with visitors.

Woodruff’s initial trio of murals, the Amistad cycle painted in 1939, depicts scenes inspired by the uprising aboard the Amistad in 1839. The first representation of the Amistad saga in the twentieth century, the cycle begins with The Mutiny on the Amistad, Woodruff’s dramatic interpretation of the battle at sea between the Mende mutineers and the Spanish slave traders who had illegally abducted them. Following the ship’s seizure off the coast of Long Island, the mutineers were imprisoned and put to trial. The Trial of the Amistad Captives, the second mural of the Amistad cycle, recalls the series of trials and appeals endured by the 26 surviving mutineers before the Supreme Court of the United States granted them their freedom in 1841. Woodruff concludes the cycle with The Repatriation of the Freed Captives, in which the former captives, accompanied by abolitionists, return to Africa prepared to begin life anew.

Like the Amistad cycle, Woodruff’s Founding of Talladega cycle progresses from slavery to freedom. The first of these three murals painted in 1942 is The Underground Railroad. It serves as a transition between themes relating to slavery in the Amistad series and the changes that occurred for blacks in this country following the Civil War. The central canvas in the cycle, Opening Day at Talladega, highlights the college’s inaugural day in 1867, when it welcomed 140 students. The second cycle concludes with The Building of Savery Library, a mural that marks the cooperative effort between blacks and whites to construct a new library for Talladega College.

Both the Savery Library and the six murals Woodruff painted for its lobby celebrated the ascent and education of African Americans while infusing racial pride and a desire for interracial harmony in the Talladega community. Although painted for a local audience, the murals reached beyond Talladega’s campus

to attract national attention when they were first unveiled and continue to do so. Today, Woodruff’s murals commissioned by Talladega College remain a symbol of the centuries-long struggle for civil rights.

Rising Up: Hale Woodruff’s Murals at Talladega College is organized by the High Museum of Art, Atlanta, Georgia, in collaboration with Talladega College, Talladega, Alabama. Its presentation in Kansas City is supported by the Hall Family Foundation and the Donald J. Hall Initiative. For additional information and related programs, visit www.nelson-atkins.org.