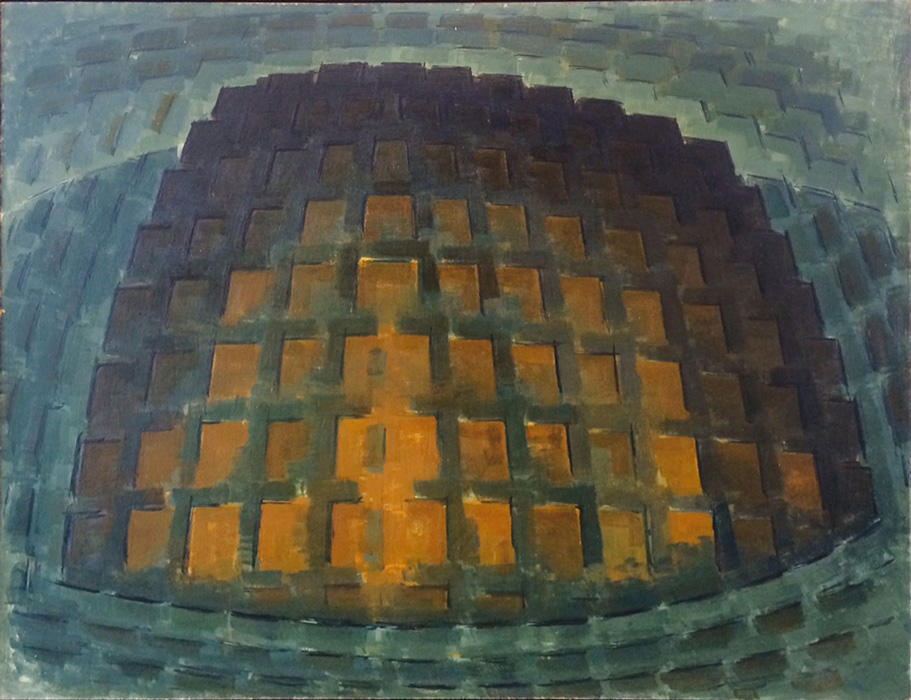 A few years ago, while walking in Loose Park, I happened upon an artist painting the trees in front of him. Wearing a brimmed hat, with a canteen dangling from his easel, the gentleman was unperturbed by the warm weather and completely absorbed in the task at hand. It was Wilbur Niewald, hard at work in one of his favorite painting locations. Four of his Loose Park subjects along with 28 other paintings are currently on view in two exhibitions, “Works From the 50’s & 60’s” and “Recent Paintings” at Haw Contemporary through May 11.

Niewald, the longtime head of the painting and print department of the Kansas City Art Institute (he retired in 1992), is also a graduate of the school. But his involvement with KCAI began at age ten when he won a competition to take Saturday classes there. His teacher, Miss Polk, emphasized simplicity, something he would realize was profoundly important.  In 1971, after decades of painting in an abstracted style, he suddenly questioned why he did not paint nature just as he saw it. That was to be a greatly liberating moment for the artist. He rejected his approach to re-interpreting landscape in favor of its unvarnished presentation. His newfound passion for directness and clarity along with his unwavering work ethic took him in a new direction.

The two concurrent exhibitions could be considered a mini-retrospective as they feature Niewald’s recent endeavors from 2013-2016 in addition to works executed prior to his stylistic U-turn. The works are arranged in three spacious galleries. The paintings from the 50’s and 60’s are divided chronologically into two spaces; the recent works hang in the largest gallery. Landscape is the single theme of the more historical work while the recent subject matter includes still life and portraiture as well. But even without knowing the dates of the works, the distinction between the earlier and later paintings is quite obvious.  The landscapes of the ‘50s and ‘60s are rendered in a distinctive abstracted style as opposed to the more traditional realism of the recent pictures.

Works such as “City III” (1956) and “Shawnee III” (1961) in the historical exhibition both showcase the artist’s unique vision. Niewald created a kind of personal shorthand to examine a familiar subject from a novel point of view. Both works interpret their subject with a series of simplified elements. The latter work exemplifies how his palette expanded and brightened as he moved away from the somber colors utilized in the early 50’s. The artist’s acknowledgment that Mondrian, Giacometti and Cezanne were some of his greatest heroes is something one can appreciate throughout the two exhibitions.

“Recent Paintings,” which was previously shown at the New York Studio School in January and February of this year, demonstrates Niewald’s consummate talents as a painter; he is equally successful whether painting a still life, portrait or landscape. His obvious devotion to his wife or the vistas of Kansas City, his longtime home, is evident in their sensitive portrayal.

I am happy to report that at age 92, Niewald is still painting six hours a day, six days a week, which means we can look forward to seeing more of his work. These exhibitions clearly demonstrate that his paintings, from any decade, are thoughtful, timeless, classic. Wilbur Niewald is truly a Kansas City institution.