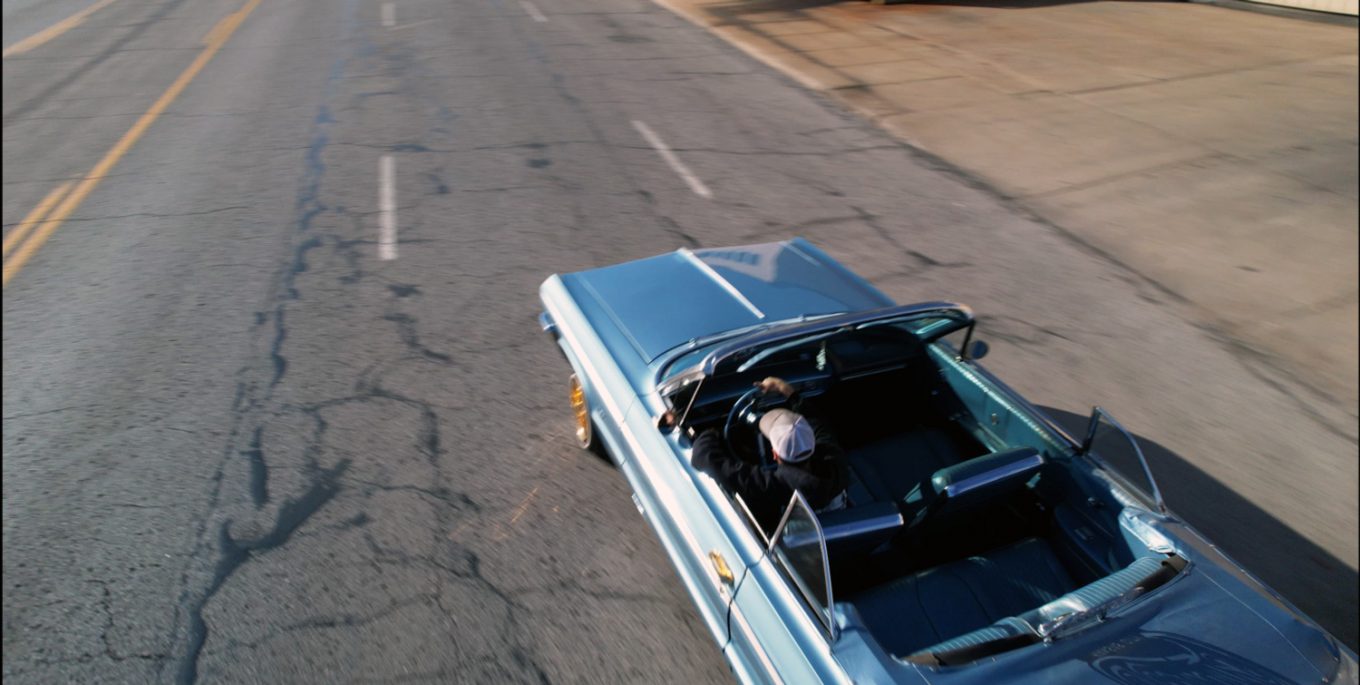 Joe Shugrue, a member of the Koolwhips car club and owner of Twin Cities Customs, drives a lowrider in this still from “Lowriders in the Heartland.” (Seth Binford and Alex Mathew)

Wrenches are turning, shop cloths are buffing, and feelings of well-earned pride are profound at a meeting last fall of the Olathe Leadership Lowrider Bike Club at the Olathe Advanced Technical Center.

Mathew, the film’s hands-on producer, assists with the lighting chores, as director and cinematographer Binford gets a close-up of bike club member Moncerrath Paramo-Perez, a junior at adjacent Olathe North High School, whose attention is entirely focused on adjusting the seat of a gleaming lowrider bike.

Just outside, there’s a parked Olathe Police car that teenage club members have converted into a lowrider. Among other characteristically cool things, the vehicle’s low-and-slow chopped body descends to within only a few inches of the street.

“Each person’s car is unique and tells a different story.”

Seth Binford, director and cinematographer, Lowriders in the Heartland

Taking it all in is Sgt. Joel Yeldell, public information officer for the Olathe Police Department, a bike club mentor and the driver of the 2011 Ford Crown Victoria that was destined for auction until its head-turning makeover. While most folks might give a typical police vehicle plenty of space, this lowrider cop car is a customized crowd-pleaser.

“It’s a work of art, and it’s way more valuable to us now than it was before,” Yeldell says. “People are pulling up beside us at stoplights with big eyes and giving thumbs up. After a car show at Olathe West (High School), I almost didn’t get out of the parking lot because of so many people taking pictures.”

Even when Yeldell pops into a convenience store parking lot, his mobile conversation piece attracts the attention
of young people who would otherwise look past him, he says.

“They would never have come up to me otherwise,” Yeldell says. “To me, it’s the ultimate measure of finding that bridge, that middle ground.”

Mathew and Binford were drawn to the predominantly Latino lowrider community’s fondness for reaching out to others, regardless of heritage or tradition.

But, to share that welcoming story, Mathew and Binford had to learn more about the lowrider scene. A pivotal guide was Martin Cervantes, a longtime lowrider aficionado with plenty of local contacts. The two filmmakers had previously featured Cervantes in fundraising videos for Youth for Christ serving Kansas City, which told about the

“We would be filming, and Martin was just sitting on his lowrider bike in his basement,” Binford recalls. “And he was like, ‘Oh, I used to have a lowrider car,’ and we started talking more about other lowriders that he knew. That was my introduction to the world of lowriders, that culture and lifestyle and what it means to them.”

“Our main goal is to narrow the gaps between different ethnic groups,” Cervantes says. “It will help us understand one another a lot better, especially when we have a common interest. You know, lowrider cars, nice and shiny lowrider bicycles — that sparks an interest in people.

“There are things that we might not do the same, because of our cultures. But, in the end, it is a common goal to spend time together, to have fun, to enjoy life, to laugh together and then share stories.”

To Cervantes, lowriders also have the power to stir the minds of the sidelined young, who may be distracted, disadvantaged or downtrodden.

“A lot of them don’t know how to express themselves,” Cervantes says. “They’re very quiet and they’re reserved. They keep to themselves.

“But lowriders are just out of this world, and that helps our youth to use their imagination. They will customize their bikes according to their imagination, and that will also help them open up to a whole different way of thinking and communicating. Not only while building the bike, but at school, or in the real world, if they have a job. And that’s what we want. We want them to express themselves without hesitation.”

Take the Money and Have Fun

“Lowriders of the Heartland” will be the 11th mini-doc by Mathew and Binford since 2015, but the only one that required grant money to get made.

“It’s really fun to take a story that’s really worth telling, but nobody would actually pay to tell it, because it doesn’t make sense financially, but it’s super important to tell,” Binford says.

“Lowriders” is also the first of the team’s docs to not be affiliated with Youth for Christ serving Kansas City, where Mathew is executive director. After documenting the efforts of Youth for Christ International in 13 countries, the Wichita-based Binford has spent the last four years as a full-time freelance cinematographer.

“I have tried not to wear the Youth for Christ hat,” Mathew says of his oversight of the production. “Obviously, your faith background and the idea of it just naturally comes up because it’s part of your character.

“But the one thing I wanted to make sure of was that Seth and I were representing ourselves and this film from the outside (of YFC). When we applied for this ArtsKC Inspiration Grant, we applied as a team to really serve this particular lowrider community that we felt was being underserved in marketing and media around the Kansas City area.”

Besides capturing lowrider activity at the Olathe Technical Center, “Lowriders” locations have included Lawrence, Shawnee Mission Park and the Crossroads Arts District. Still, the mini-doc’s anticipated run time will indeed be mini at less than 5 minutes. That’s because a $2,000 grant, although deeply appreciated by the filmmakers, will need to be supplemented by additional sponsors to cover total production costs, and also because attention spans, especially online, just aren’t what they used to be.

“More people are going to watch this film by clicking on their phones and personal screens,” Mathew says. “We do have aspirations to show it at a small venue, but we’re going to trigger all our lowrider clubs to share it on social media, where it will get shared over and over again. It will be a resource, especially in the Midwest, to promote lowrider communities and their art.”

“Lowriders are just out of this world, and that helps our youth to use their imagination . . .
We want them to express themselves without hesitation.”

And don’t forget about the fun of it all, Binford says. Before shooting anything, he made sure to take his first-ever lowrider ride at a First Friday cruising event in the Crossroads.

“I thought, ‘I can’t do this project without experiencing it first,’” Binford remembers. “So I got to jump in a car and cruise with them. It makes you feel like a kid, it’s so much fun. They’ve got the windows down, the music going. The car that I was in was a three-wheeler, so it could lift one tire completely off the street while it was driving, and it could bounce.

“I didn’t have a camera. It was just about being there to see what it’s all about — the paint jobs, the rims, the way that they customize the cars, the type of hydraulics that they put in them. Each person’s car is unique and tells a different story.”

A story fueled by a well-earned pride.

“It is the pride,” Cervantes says. “It is the love. It is who we are. It is how we identified ourselves within our community and the world. But, mostly, it’s the pride.”